Today’s Development Consultation Forum at the Havant Plaza gave us the first sight of an outline proposal for around 90 new homes on land immediately west of The Oaks crematorium. The presentation, by planning consultants engaged by the land owner, White Farming Ltd., aka Southleigh Estate, highlighted the fact that a considerable amount of work has already been done despite the fact that the site concerned does not appear at all on the currently adopted Local Plan.  Residents of the Barton’s Rise estate present at the meeting commented that they had been assured when they bought their homes that there were no plans for development on their eastern boundary ‘because of proximity to the crematorium.’  Their anger and frustration is justifiable.

From a parochial Havant Civic Society viewpoint, it could be argued that the Barton’s Road site is ‘not in our patch’.  However, with rapid expansion of housing development now encircling the town centre, it’s important that we consider the potential impacts on and benefits for the town centre as a natural destination for these new communities.

Firstly, some geographical context to this evening’s Development Consultation Forum. In the picture below, ‘The Oaks’ crematorium is at the top left and the Wyevale Garden Centre is at the bottom of the frame, slightly left of centre. Bartons road runs from the west at the bottom, to the north at the top. Eastleigh Road can be seen running southwards – left to right – from the Spire hospital to its junction with Southleigh Road, centre right.

This same aerial view will be radically different in ten years time, with most of the arable farmland replaced by housing.  Whether or not the schools, GP surgeries and transport infrastructure will be in place to service those houses were questions high on the agenda of the members of public represented at tonight’s Development Consulting Forum.

At the top of the picture, Southleigh House is already earmarked for around 90 homes.  On the large field occupying the right hand side of this image, the site road is already under construction from Barton’s Road leading to another 175 houses planned by Bellway.  Towards the bottom on the left hand side, the Linden Homes ‘Barton’s Rise’ estate can be seen opposite the entrance to the garden centre.  Each of these housing developments are on land allocated in the currently adopted Local Plan and, therefore, come as no surprise. The issue we are highlighting is that the proposal now under discussion relates to land not previously allocated for housing.

The development forum was considering the preliminary stages of an application by the Southleigh Estate to develop the land between the Crematorium access road and the recently developed Linden Homes ‘Barton’s Rise’ estate.  Using the landowner’s consultant’s charts, here is the site in its more normal ‘north up’ orientation with Barton’s Road running from left to right in the middle with the Spire Hospital at the top right. The crematorium is off the top of this picture, but the site access road can be clearly seen.

Now, let’s put the proposed development into this context: 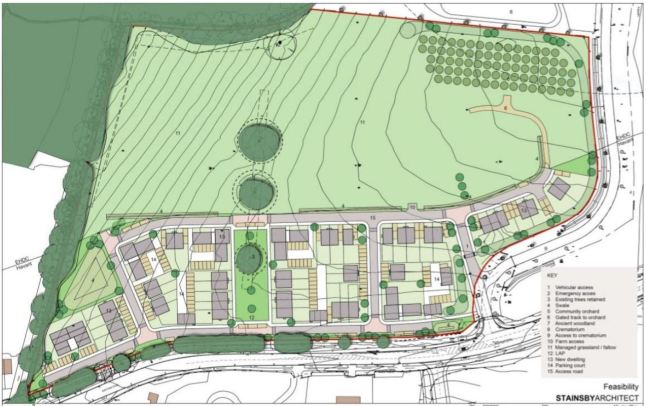 The proposal is for around 85-90 houses, with the usual mix of ‘affordable’, running from a site access road taken straight from a new T- junction from the crematorium access road.

It’s interesting to note that the bottom half of this picture falls within the remit of Havant Borough Council while the top half, left pleasantly green, is the responsibility of East Hants District Council.

The efforts by the landowner’s consultants to assure residents that the land to the north of the new houses, including the community orchard visible at top right of the diagram alongside the crematorium, would remain as a well run and managed ‘open space’ probably fell on deaf ears.  It doesn’t take much of a gambler to lay odds that EHDC would jump at the chance of developing the top half of this site should HBC set the precedent.  After all, that would be another fifty houses off their own targets while Havant schools and GPs would be left shouldering the responsibility for the residents.

Graham Beeston from Warblington and Denvilles Residents’ Association and Frank Ball from Rowlands Castle Parish Council both made presentations expressing similar concerns. Both groups share our frustration that these development proposals seem not to be underpinned by a robust and comprehensive infrastructure plan designed to ensure that the necessary schools, medical, services and transport infrastructure are in place before these new residents pick up their front door keys.

We appreciated Councillor Leah Turner opening the meeting to the floor in a welcome change from normal protocol. However, the resulting discussion was illuminating, highlighting the anger and frustration of the Barton’s Rise residents outlined above.  A resident from the south side of Barton’s road asked whether the Council fully appreciated that the area had no access to shops and services and poor transport links, with the nearest bus stop 800 metres away.  The consultants responded that they’d discussed that issue, but First Bus saw insufficient demand from this site to justify re-routing their buses.  If ever there was a need for an overarching and comprehensive infrastructure plan, this was it.

There was further worrying news from the Barton’s Rise residents who reported that bat boxes on the proposed development site had mysteriously been removed within the last couple of weeks; curious timing given tonight’s Development Consultation Forum.  The landowner’s consultants were quick to say they had no knowledge of such action and were equally quick to confirm that such an act in an area known to host Bechstein’s bats would be a criminal act that would not be in the interest of the landowner.

We will keep a close eye on any plans for this site as and when they are lodged with HBC.